Arts on the Air
Bach in the Limelight
This year sees the 250th anniversary of the death of the
composer Johann Sebastian Bach, and to mark the occasion Arts on the Air will present regular features about this great Baroque master. Bach's most famous works include his numerous choral works, the Brandenburg concerti and countless keyboard compositions.
In the months ahead,the world renowned pianist Andras Schiff joins the programme to talk about the special place the works of Bach play in his repertoire.We go behind the scenes with Britain’s Monteverdi Choir, to talk with conductor John Elliot Gardener about his special Bach 2000 project, which entails performing all the major choral works this year. However we will not only be focusing on the traditional interpretations of Bach's music, but will also be taking a look at some less conventional performances, when we meet up with Jazz pianist Uri Cain. His recently released recording of Bach’s Goldberg Variations has excited both classical and jazz music fans and critics the world over.
So join us on Arts on the Air as we celebrate this special year with the music of Johann Sebastian Bach. 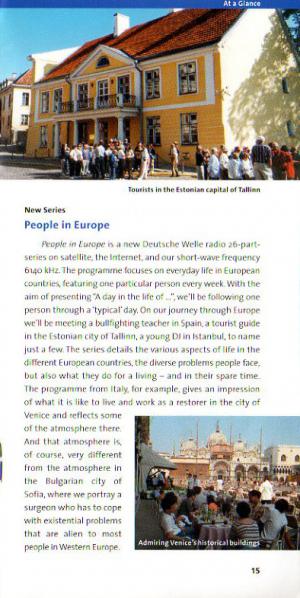 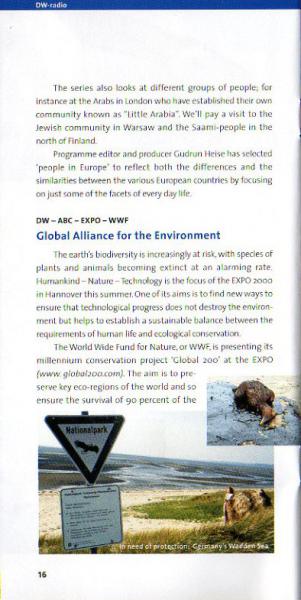 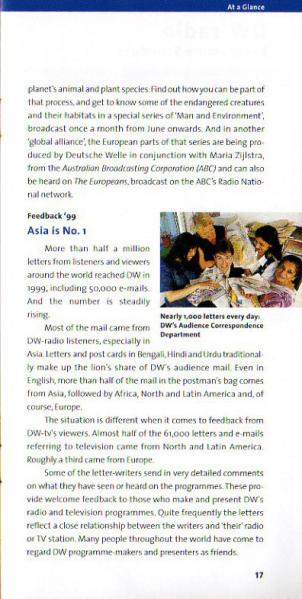 New Series
People in Europe
People in Europe is a new Deutsche Welle radio 26-part-series on satellite, the Internet, and our short-wave frequency 6140 kHz.The programme focuses on everyday life in European countries, featuring one particular person every week.With the aim of presenting“A clay in the life of...",we'll be following one person through a ‘typical’ day. On our journey through Europe we'll be meeting a bullfighting teacher in Spain, a tourist guide in the Estonian city of Tallinn, a young DJ in Istanbul,to name just a few.The series details the various aspects of life in the different European countries,the diverse problems people face, but also what they do for a living — and in their spare time. The programme from Italy, for example, gives an impression of what it is like to live and work as a restorer in the city of Venice and reflects some of the atmosphere there. And that atmosphere is, of course, very different from the atmosphere in the Bulgarian city of Sofia, where we portray a surgeon who has to cope with existential problems that are alien to most people in Western Europe.
The series also looks at different groups of people; for instance at the Arabs in London who have established their own community known as “Little Arabia”. We'll pay a visit to the Jewish community in Warsaw and the Saami-people in the north of Finland.
Programme editor and producer Gudrun Heise has selected ‘people in Europe’ to reflect both the differences and the similarities between the various European countries by focusing on just some of the facets of every day life.

DW-ABC-EXPO-WWF
Global Alliance for the Environment
The earth’s biodiversity is increasingly at risk, with species of plants and animals becoming extinct at an alarming rate. Humankind — Nature —Technology is the focus of the EXPO 2000 in Hannover this summer.One of its aims is to find new ways to ensure that technological progress does not destroy the environment but helps to establish a sustainable balance between the requirements of human life and ecological conservation. The World Wide Fund for Nature, 0r WWF, is presenting its millennium conservation project ‘Global zoo’ at the EXPO (wwvv. global200.com). The aim is to preserve key eco-regions ofthe world and so ensure the survival of 90 percent of the planet's animal and plant species. Find out how you can be part of that process, and get to know some of the endangered creatures and their habitats in a special series of‘Man and Environment’, broadcast once a month from June onwards. And in another ‘global alliance',the European parts of that series are being produced by Deutsche Welle in conjunction with Maria Zijlstra, from the Australian Broadcasting Corporation (ABC) and can also be heard on The Europeans, broadcast on the ABC's Radio National network.


Feedback‘99
Asia is No.1
More than half a million letters from listeners and viewers around the world reached DW in 1999, including 50,000 e-mails.
And the number is steadily rising Nearly 1,000 letters every day:
Most of the man Came from DW's Audience Correspondence Department
DW-radio listeners, especially in Asia. Letters and post cards in Bengali, Hindi and Urdu traditionally make up the lion's share of DW's audience mail. Even in English, more than half of the mail in the postman's bag comes from Asia, followed by Africa, North and Latin America and, of course, Europe.
The situation is different when it comes to feedback from DW-tv's viewers. Almost half of the 61,000 letters and e-mails referring to television came from North and Latin America. Roughly a third came from Europe.
Some of the letter-writers send in very detailed comments on what they have seen or heard on the programmes.These provide welcome feedback to those who make and present DW's radio and television programmes. Quite frequently the letters reflect a close relationship between the writers and ‘their’ radio or TV station. Many people throughout the world have come to regard DW programme-makers and presenters as friends.