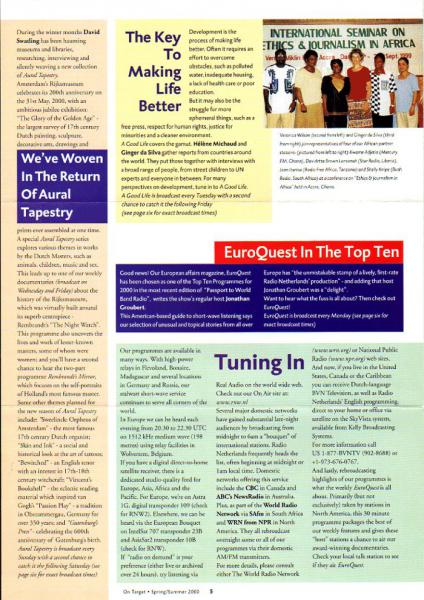 We've Woven In the Return Of aural Tapestry

During the winter months David Swatling has been haunting museums and libraries, researching, interviewing and silently Weaving a new collection of Aural Tapestry.
Amsterdam's Rijksmuseum celebrates its 200th anniversary on the 31st May, 2000, with an ambitious jubilee exhibition:
“The Glory of the Golden Age” - the largest survey of 17th century Dutch painting, sculpture, decorative arts, drawings and prints ever assembled at one time.
A special Aural Tapestry series explores various themes in works by the Dutch Masters, such as animals, children, music and sex.
This leads up to one of our weekly documentaries (broadcast on Wednesday and Friday) about the history of the Rijksmuseum, which was virtually built around its superb centrepiece - Rembrandts “The Night Watch”.
This programme also uncovers the lives and work of lesser—known masters, some of whom were women; and you'll have a second chance to hear the two—part programme Rembrandt's Mirror, which focuses on the self-portraits of Hollands most famous master.
Some other themes planned for the new season of Aural Tapestry include: ‘Sweelinck: Orpheus of Amsterdam” - the most famous 17th century Dutch organist; “Skin and Ink” - a social and historical look at the art of tattoos; “Bewitched” - an English tenor with an interest in 17th—18th century witchcraft; “Vincents Bookshelf” - the eclectic reading material which inspired van Gogh's “Passion Play” - a tradition in Oberammergau, Germany for over 350 years; and “Gutenburg's Press”- celebrating the 600th anniversary of Gutenburg's birth.
Aural Tapestry is broadcast every Sunday with a second chance to catch it the following Saturday (see page six for exact broadcast times)


The Key To Making Life Better
Development is the process of making life better. Often it requires an effort to overcome obstacles, such as polluted water, inadequate housing, a lack of health care or poor education.
But it may also be the struggle for more ephemeral things, such as a free press, respect for human rights, justice for minorities and a cleaner environment.
A Good Life covers the gamut. Héléne Michaud and Ginger da Silva gather reports from countries around the world. They put those together with interviews with a broad range of people, from street children to UN experts and everyone in between. For many perspectives on development, tune in to A Good Life.
A Good Life is broadcast every Tuesday with a second chance to catch it the following Friday
(see page six for exact broadcast times)


EuroQuest In The Top Ten
Good news! Our European affairs magazine, EuroQuest has been chosen as one of the Top Ten Programmes for 2000 in the most recent edition of “ Passport to World Band Radio", writes the show's regular host Jonathan Groubert.
This American-based guide to short-wave listening says our selection of unusual and topical stories from all over Europe has “the unmistakable stamp of a lively, first-rate Radio Netherlands’ production" - and adding that host Jonathan Groubert was a "delight".
Want to hear what the fuss is all about? Then check out EuroQuest!
EuroQuest is broadcast every Monday (see page six for exact broadcast times)


Tuning In
Our programmes are available in many ways. With high—power relays in Flevoland, Bonaire, Madagascar and several locations in Germany and Russia, our stalwart short-wave service continues to serve all corners of the world.
In Europe we can be heard each evening from 20.30 to 22.30 UTC on 1512 kHz medium wave (198 metres) using relay facilities in Wolvertem, Belgium.
If you have a digital direct-to-home satellite receiver, there is a dedicated studio-quality feed for Europe, Asia, Africa and the Pacific. For Europe, we're on Astra 1G, digital transponder 109 (check for RNW2). Elsewhere, we can be heard via the European Bouquet on IntelSat 707 transponder 23B and AsiaSat2 transponder 10B (check for RNW).
If “radio on demand” is your preference (either live or archived over 24 hours), try listening via Real Audio on the world wide web.
Check out our On Air site at: www.rnw.nl
Several major domestic networks have gained substantial late-night audiences by broadcasting from midnight to 6am a “bouquet” of international stations. Radio Netherlands frequently heads the list, often beginning at midnight or 1am local time. Domestic networks offering this service include the CBC in Canada and ABC's NewsRadio in Australia. Plus, as part of the World Radio Network via SAfm in South Africa and WRN from NPR in North America. They all rebroadcast overnight some or all of our programmes via their domestic AM/FM transmitters.
For more details, please consult either The World Radio Network (www.wrn.org) or National Public Radio (www.npr.org) web sites. And now, if you live in the United States, Canada or the Caribbean you can receive Dutch-language BVN Television, as well as Radio Netherlands’ English programming, direct to your home or office via satellite on the SkyVista system, available from Kelly Broadcasting Systems.
For more information call US 1-877-BVNTV (902-8688) or +1-973-676-0767.
And lastly, rebroadcasting highlights of our programmes is what the weekly Eur0Quest is all about. Primarily (but not exclusively) taken by stations in North America, this 30 minute programme packages the best of our weekly features and gives these “host” stations a chance to air our award—winning documentaries.
Check your local talk station to see if they air EuroQuest. 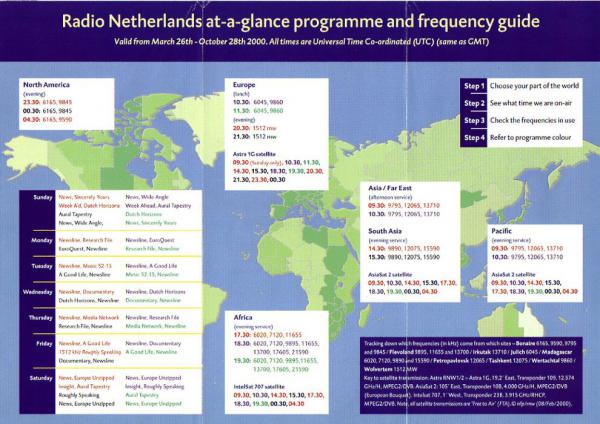