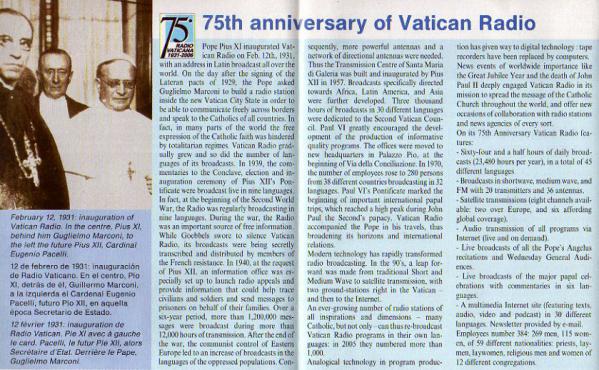 February 12, 1931: inauguration of Vatican Radio. In the centre, Pius XI, behind him Guglielmo Marconi, to the left the future Pius XII, Cardinal Eugenio Pacelli.

75th anniversary of Vatican Radio
Pope Pius XI inaugurated Vatican Radio on Feb. 12th, 1931, with an address in Latin broadcast all over the world. On the day after the signing of the Lateran pacts of 1929, the Pope asked Guglielmo Marconi to build a radio station inside the new Vatican City State in order to be able to communicate freely across borders and speak to the Catholics of all countries. In fact, in many parts of the world the free expression of the Catholic faith was hindered by totalitarian regimes. Vatican Radio gradually grew and so did the number of languages of its broadcasts. In 1939, the commentaries to the Conclave, election and inauguration ceremony of Pius XII's Pontificate were broadcast live in nine languages. In fact, at the beginning of the Second World War. the Radio was regularly broadcasting in nine languages. During the war, the Radio was an important source of free information. While Goebbels swore to silence Vatican Radio, its broadcasts were being secretly transcribed and distributed by members of the French resistance. In 1940, at the request of Pius XII, an information office was especially set up to launch radio appeals and provide information that could help trace civilians and soldiers and send messages to prisoners on behalf of their families. Over a six-year period, more than 1,200,000 messages were broadcast during more than 12,000 hours of transmission. After the end of the war, the communist control of Eastern Europe led to an increase of broadcasts in the languages of the oppressed populations. Consequently, more powerful antennas and a network of directional antennas were needed. Thus the Transmission Centre of Santa Maria di Galeria was built and inaugurated by Pius XII in 1957. Broadcasts specifically directed towards Africa, Latin America, and Asia were further developed. Three thousand hours of broadcasts in 30 different languages were dedicated to the Second Vatican Council. Paul VI greatly encouraged the development of the production of informative quality programs. The offices were moved to new headquarters in Palazzo Pio, at the beginning of Via della Conciliazione. In 1970, the number of employees rose to 280 persons from 38 different countries broadcasting in 32 languages. Paul VI's Pontificate marked the beginning of important international papal trips, which reached a high peak during John Paul the Second's papacy. Vatican Radio accompanied the Pope in his travels, thus broadening its horizons and international relations.
Modern technology has rapidly transformed radio broadcasting. In the 90’s, a leap forward was made from traditional Short and Medium Wave to satellite transmission, with two ground-stations right in the Vatican - and then to the Internet.
An ever-growing number of radio stations of all inspirations and dimensions - many Catholic, but not only — can thus re-broadcast Vatican Radio programs in their own languages: in 2005 they numbered more than 1,000.
Analogical technology in program production has given way to digital technology : tape recorders have been replaced by computers.
News events of worldwide importance like the Great Jubilee Year and the death of John Paul II deeply engaged Vatican Radio in its mission to spread the message of the Catholic Church throughout the world, and offer new occasions of collaboration with radio stations and news agencies of every sort.
On its 75th Anniversary Vatican Radio features:
- Sixty-four and a half hours of daily broadcasts (23,480 hours per year), in a total of 45 different languages
- Broadcasts in shortwave, medium wave, and FM with 20 transmitters and 36 antennas.
- Satellite transmissions (eight channels available: two over Europe, and six affording global coverage).
- Audio transmission of all programs via Internet (live and on demand).
- Live broadcasts of all the Pope's Angelus recitations and Wednesday General Audiences.
- Live broadcasts of the major papal celebrations with commentaries in six languages.
- A multimedia Internet site (featuring texts, audio, video and podcast) in 30 different languages. Newsletter provided by e-mail.
Employees number 384: 269 men, 115 women, of 59 different nationalities: priests, laymen, laywomen, religious men and women of 12 different congregations.