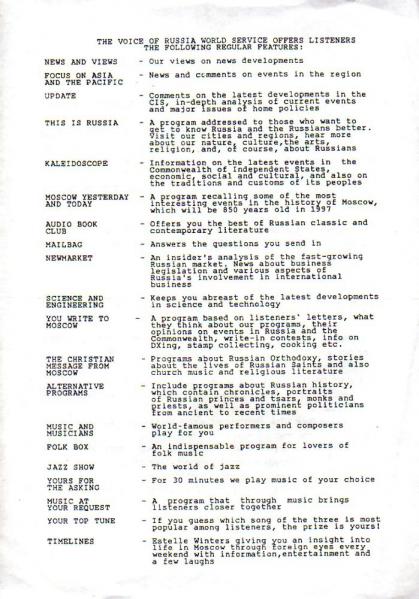 NEWS AND VIEWS - Our views on news developments

UPDATE — Comments on the latest developments in the CIS, in—depth analysis of current events and major issues of home policies

THIS IS RUSSIA - A program addressed to those who want to get to know Russia and the Russians better.
Visit our cities and regions, hear more about our nature culture,the arts,religion, and, oi course, about Russians

KALEIDOSCOPE - Information on the latest events in the Commonwealth of Independent States, economic, social and cultural, and also on the traditions and customs of its peoples

MOSCOW YESTERDAY AND TODAY - A program recalling some of the most interesting events in the history of Moscow, which will be 850 years old in 1997

MAILBAG - Answers the questions you send in

NEWMARKET - An insider's analysis of the fast—growing Russian market. News about business legislation and various aspects of Russia's involvement in international business

YOU WRITE TO MOSCOW - A program based on listeners' letters, what they think about our programs, their opinions on events in Russia and the Commonwealth, write—in contests, info on DXing, stamp collecting, cooking etc.

THE CHRISTIAN MESSAGE FROM MOSCOW - Programs about Russian Orthodoxy, stories about the lives of Russian Saints and also church music and religious literature

ALTERNATIVE PROGRAMS - Include programs about Russian history, which contain chronicles, portraits of Russian princes and tsars monks and priests, as well as prominent politicians from ancient to recent times

MUSIC AND MUSICIANS - World-famous performers and composers play for you

FOLK BOX - An indispensable program for lovers of folk music

JAZZ SHOW - The world of jazz

YOUR TOP TUNE - If you guess which song of the three is most popular among listeners, the prize is yours!

TIMELINES - Estelle Winters giving you an insight into life in Moscow through foreign eyes every weekend with information,enterta1nment and a few laughs 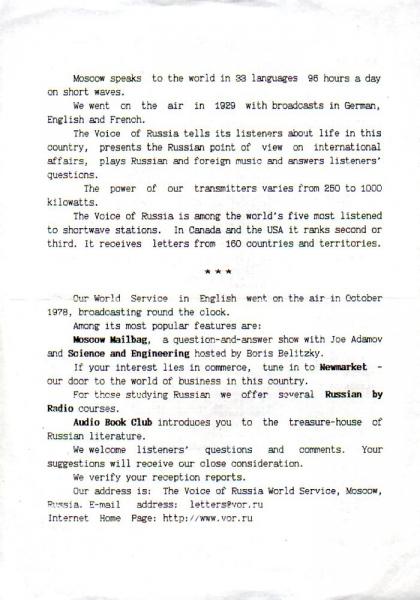 Moscow speaks to the world in 33 languages 96 hours a day on short waves.
We went on the air in 1929 with broadcasts in German, English and French.
The Voice of Russia tells its listeners about life in this country, presents the Russian point of view on international affairs, plays Russian and foreign music and answers listeners’questions.
The power of our transmitters varies from 250 to 1000 kilowatts.
The Voice of Russia is among the world’s five most listened to shortwave stations. In Canada and the USA it ranks second or third. It receives letters from 160 countries and territories.

0ur World Service in English went on the air in October 1978, broadcasting round the clock.
Among its most popular features are:
Moscow Mailbag, a question—and—answer show with Joe Adamov and Science and Engineering hosted by Boris Belitzky.
If your interest lies in commerce, tune in to Newmarket — our door to the world of business in this country.
For those studying Russian we offer several Russian by Radio courses.
Audio Book Club introduces you to the treasure-house of Russian literature.
We welcome listeners' questions and comments. Your suggestions will receive our close consideration.
We verify your reception reports.
Our address is: The Voice of Russia World Service, Moscow, Russia.
E-mail address: letters@vor.ru
Internet Home Page: http://www.vor.ru
スポンサーサイト