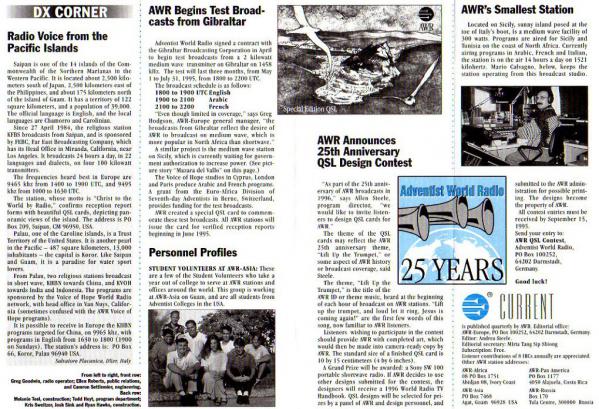 DX CORNER
Radio Voice from the Pacific Islands
Saipan is one of the 14 islands of the Commonwealth of the Northern Marianas in the Western Pacific. It is located about 2,500 kilometers south of Japan, 2,500 kilometers east of the Philippines, and about 175 kilometers north of the island of Guam. It has a territory of 122 square kilometers, and a population of 39,000. The official language is English, and the local languages are Chamorro and Carolinian.
Since 27 April 1984, the religious station KFBS broadcasts from Saipan, and is sponsored by FEBC, Far East Broadcasting Company, which has its Head Office in Miranda, California, near Los Angeles. It broadcasts 24 hours a day, in 22 languages and dialects, on four 100 kilowatt transmitters.
The frequencies heard best in Europe are 9465 khz from 1400 to 1900 UTC, and 9495 khz from 1000 to 1630 UTC.
The station, whose motto is “Christ to the World by Radio,” confirms reception report forms with beautiful QSL cards, depicting panoramic views of the island. The address is PO Box 209, Saipan, CM 96950, USA.
Palau, one of the Caroline islands, is a Trust Territory of the United States. It is another pearl in the Pacific — 487 square kilometers, 13,000 inhabitants - the capital is Koror. Like Saipan and Guam, it is a paradise for water sport lovers.
From Palau, two religious stations broadcast in short wave, KHBN towards China, and KVOH towards India and Indonesia. The programs are sponsored by the Voice of Hope World Radio network, with head office in Van Nuys, California (sometimes confused with the AWR Voice of Hope programs).
It is possible to receive in Europe the KHBN programs targeted for China, on 9965 khz, with programs in English from 1630 to 1800 (1900 on Sundays). The station’s address is: PO Box 66, Koror, Palau 96940 USA.
Salvatore Placantca, DXer Italy

AWR Begins Test Broadcasts from Gibraltar
Adventist World Radio signed a contract with the Gibraltar Broadcasting Corporation in April to begin test broadcasts from a 2 kilowatt medium wave transmitter on Gibraltar on 1458 kHz. The test will last three months, from May 1 to July 31, 1995, from 1800 to 2200 UTC.
The broadcast schedule is as follows:
1800 to 1900 UTC English
1900 to 2100 Arabic
2100 to 2200 French
“Even though limited in coverage,” says Greg Hodgson, AWR-Europe general manager, “the broadcasts from Gibraltar reflect the desire of AWR to broadcast on medium wave, which is more popular in North Africa than shortwave."
A similar project is the medium wave station on Sicily, which is currently waiting for government authorization to increase power. (See picture story “Mazara del Vallo" on this page.)
The Voice of Hope studios in Cyprus, London and Paris produce Arabic and French programs. A grant from the Euro-Africa Division of Seventh-day Adventists in Berne, Switzerland, provides funding for the test broadcasts.
AWR created a special QSL card to commemorate these test broadcasts. All AWR stations will issue the card for verified reception reports beginning in June 1995.


Personnel Profiles
STUDENT VOLUNTEERS AT AWR-ASIA: These are a few of the Student Volunteers who take a year out of college to serve at AWR stations and offices around the world. This group is working at AWR-Asia on Guam, and are all students from Adventist Colleges in the USA.

AWR Announces 25th Anniversary QSL Design Contest
“As part of the 25th anniversary of AWR broadcasts in 1996," says Allen Steele, program director, “we would like to invite listeners to design QSL cards for AWR.”
The theme of the QSL cards may reflect the AWR 25th anniversary theme, “Lift Up the Trumpet," or some aspect of AWR history or broadcast coverage, said Steele.
The theme “Lift Up the Trumpet," is the title of the AWR ID or theme music, heard at the beginning of each hour of broadcast on AWR stations. “Lift up the trumpet, and loud let it ring, Jesus is coming again!” are the first few words of this song, now familiar to AWR listeners.
Listeners wishing to participate in the contest should provide AWR with completed art, which would then be made into camera-ready copy by AWR. The standard size of a finished QSL card is 10 by 15 centimeters (4 by 6 inches).
A Grand Prize will be awarded: a Sony SW 100 portable shortwave radio. If AWR decides to use other designs submitted for the contest, the designers will receive a 1996 World Radio TV Handbook. QSL designs will be selected for prizes by a panel of AWR and design personnel, and submitted to the AWR administration for possible printing. The designs become the property of AWR.
All contest entries must be received by September 15, 1995.

AWR's Smallest Station
Located on Sicily, sunny island posed at the toe of Italy‘s boot, is a medium wave facility of 500 watts. Programs are aired for Sicily and Tunisia on the coast of North Africa. Currently airing programs in Arabic, French and Italian, the station is on the air 14 hours a day on 1521 kilohertz. Mario Calvagno, below, keeps the station operating from this broadcast studio.
スポンサーサイト