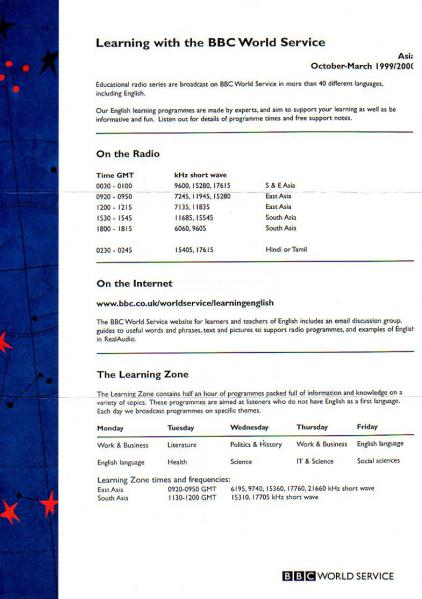 Educational radio series are broadcast on BBC World Service in more than 40 different languages,
including English.
Our English learning programmes are made by experts, and aim to support your learning as well as be
informative and fun. Listen out for details of programme times and free support notes.

The BBC World Service website for learners and teachers of English includes an email discussion group,
guides to useful words and phrases, text and pictures to support radio programmes, and examples of English in RealAudio.

The Learning Zone
The Learning Zone contains half an hour of prograammes packed full of information and knowledge on a
variety of topics. These programmes are aimed at listeners who do not have English as a first language.
Each day we broadcast programmes on specific themes. 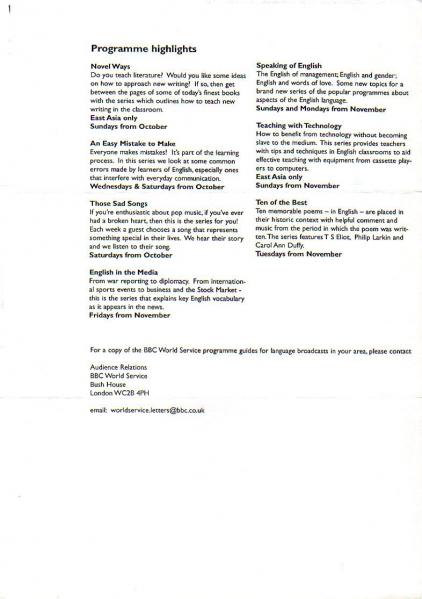 Novel Ways
Do you teach literature? Would you like some ideas
on how to approach new writing? If so, then get
between the pages of some of today’s finest books
with the series which outlines how to teach new
writing in the classroom.
East Asia only
Sundays from October

An Easy Mistake to Make
Everyone makes mistakes! It's part of the learning l
process. In this series we look at some common
errors made by learners of English, especially ones
that interfere with everyday communication.
Wednesdays & Saturdays from October

Those Sad Songs
If you’re enthusiastic about pop music, if you've ever
had a broken heart, then this is the series for you! l
Each week a guest chooses a song that represents
something special in their lives. We hear their story
and we listen to their song.
Saturdays from October

English in the Media
From war reporting to diplomacy. From international
sports events to business and the Stock Market -
this is the series that explains key English vocabulary
as it appears in the news.
Fridays from November


Speaking of English
The English of management; English and gender;
English and words of love. Some new topics for a
brand new series of the popular programmes about
aspects of the English language.
Sundays and Mondays from November

Teaching with Technology
How to benefit from technology without becoming
slave to the medium. This series provides teachers
with tips and techniques in English classrooms to aid
effective teaching with equipment from cassette players
to computers.
East Asia only
Sundays from November

Ten of the Best
Ten memorable poems - in English — are placed in
their historic context with helpful comment and
music from the period in which the poem was written.
The series features T S Eliot, Philip Larkin and
Carol Ann Duffy.
Tuesdays from November